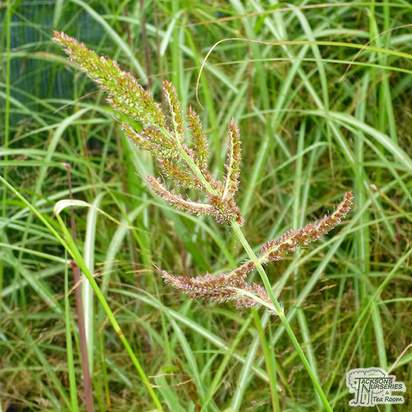 This deciduous grass is a vigorous grower, reaching heights of 2 metres or more! Graceful, arching leaves with a distinctive white stripe down the middle of each are joined by reddish-brown feather-like tall flowers in late summer and early autumn. This grass is an excellent addition to any mixed border, it is also quite spectacular when planted in bold drifts.

Also known as Eulalia grass, Miscanthus is from the Greek mischos (stalk) and anthos (flower). Comprised of approximately 20 species, Miscanthus are native to marshes, slopes mountainsides and other open habitats. Miscanthus are best in moisture retentive soil and handle water-logging reasonably well compared to many other grasses however they can adapt well to dryer soil conditions.

Please Note: Plants in pot sizes OVER 15 litre pots will require a pallet delivery starting at £79.99 per pallet. Our specimen bamboos in 20 litre pots and above can grow up to around 3-4m while here on the nursery. Due to domestic courier weight restrictions delivery is only possible via a freight courier on a pallet. Unfortunately we are restricted to a maximum consignment height of 2m, this has to include the height of the pallet and the height of the pot so we have to cut the plants accordingly. Cutting the plants down with not harm their growth. As most of the foliage is usually towards the top half of the plant they can look quite sparse however eventually you will be left with a far denser bushier plant.

Evergreen grasses can be trimmed in autumn / spring. Remove brown tips and cut back dead leaves that usually collect around the base of the plant.