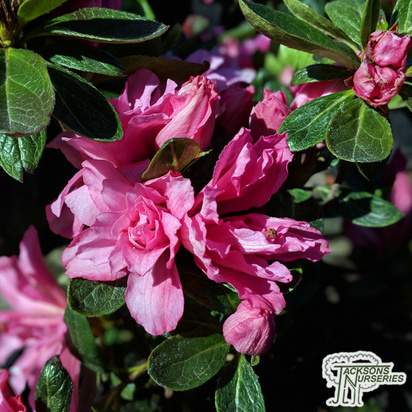 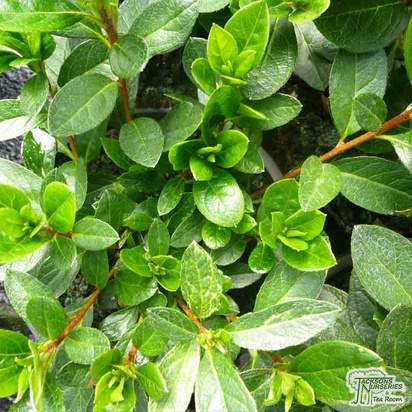 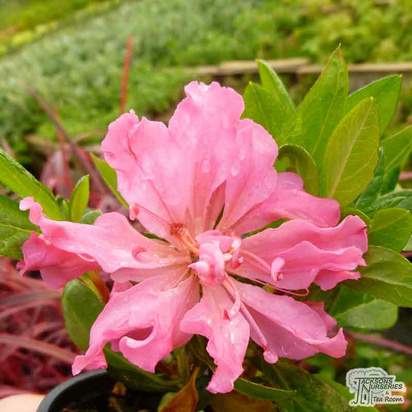 Azalea japonica 'Bloom-a-thon Pink' is an evergreen shrub so named because of the truly impressive blooms it offers throughout the year. Like normal azaleas the 'Bloom-a-thon Pink' flowers in spring, producing brilliant pink blossoms of curly double petals. However, unlike normal azaleas, this variety reblooms in spectacular fashion in midsummer and continues to offer a constant display until the first autumn frost.

The evergreen foliage is disease resistant and maintains its rich green colour all year round. Azalea japonica  'Bloom-a-thon Pink' is a truly remarkable self-deadheading variety that offers huge interest and showy colour in the garden over an extended period of time.

As with all rhododendrons add ericaceous compost when planting. Rhododendrons tend to have fine roots - so extra care. Don't plant too deep and water thoroughly; especially during dryer spells.

Unlike many garden centres, supermarkets and some nurseries here at Jacksons Nurseries we sell the majority of our stock all year round. Our stock is for the most part grown outdoors making it far hardier than those grown under glass and/or only sold ‘In Season’.

Here at Jacksons Nurseries we would favour a hardy outdoor grown plant every time. They are far less likely to suffer from the shock of being planted in colder conditions and they will begin to establish more rapidly the following spring. This can mean that they don’t look like a ‘picture perfect’ plant when purchased out of season but with the correct care and a little time you’ll have a wonderful plant to enjoy for many years to come.

Rhododendrons are grown for their impressive flowers which usually bloom during the spring time. They come in an incredible range of colours, and make a beautiful feature in any garden.

There is a slight difference between Rhododendrons and Azaleas. The easiest way to distinguish between the two types is by counting their stamens. Rhododendrons have ten or more stamens in their flowers while Azaleas have five. Rhododendrons also tend to grow taller than Azaleas, which grow outwards rather than up.

Rhododendrons should be planted with a root ball, if the plant is field grown, or with their container mix if they are container grown. In more favourable climates, rhododendrons can be planted at any time of year. In hotter areas, planting in the autumn is recommended and if you are planting in a cold climate, early spring planted is preferred.

Plant the rhododendron high in light, well-draining soil. Rhododendrons and Azaleas generally need an acidic soil with a pH of around 5.5. Soils with pH higher than 5.5 should be acidified before planting Rhododendrons.

If you have alkaline soil, you will need to grow your rhododendrons as container specimens as reducing soil pH is not a simple task.

Most Rhododendrons with tolerate a more open site as long as they are sheltered from cold, dry wings. Avoid frost pockets, and sites that are in direct early morning sunlight.

Rhododendrons, in general, do not require a great deal of pruning aside from the occasional removal of dead wood and dead or spent flowers. Many rhododendrons do respond well to a hard cutting back, especially deciduous Azaleas and rough-barked Rhododendrons.

You may prune out crowded shoots and diseased or damaged shoots in order to contain and limit the growth of the shrub if it is necessary. Most rhododendrons respond well from mulching and feeding after pruning. Use a high-potassium fertiliser and mulch with well-rotted compost or leaf mould.

Sometimes Rhododendrons can fall prey to bud-drop, or could simply not flower. A short period of dryness in the late summer months can restrict the flowers from blooming, and buds failing to form. To prevent this, mulch and water thoroughly and regularly during dryer periods from July onwards.

Leaf drop can also occur following a period of drought and hot weather. Water thoroughly if drought has occurred. It can also appear following waterlogging. To aid this, apply bark to absorb some of the water and feed it with continuous release plant food after the danger has passed. This will help the plant rebuild its root system.

Although it may sound counter-intuitive, water the plant regularly after periods of waterlogging as it will be far more susceptible to drought stress in the future.

Pests that bother rhododendrons include vine weevils and scale insects. These can both be eliminated with pesticides, but don’t spray pesticides in the daytime when pollinators are active.

There are quite a few rhododendron-specific diseases which are mainly fungal. These include bud blast, powdery mildew, petal blight, azalea leaf gall, leaf spots and rust. They are also affected by more generalised diseases such as honey fungus, root rot and silver leaf.

The majority of these diseases can be treated with a fungal spray, the removal of infected plant matter and the destruction of said plant matter. However, there are no chemical controls for root rot, and honey fungus is fatal to the infected plant and other surrounding plants.

The best course of action to rid honey fungus from your garden is by burning all affected plant matter.